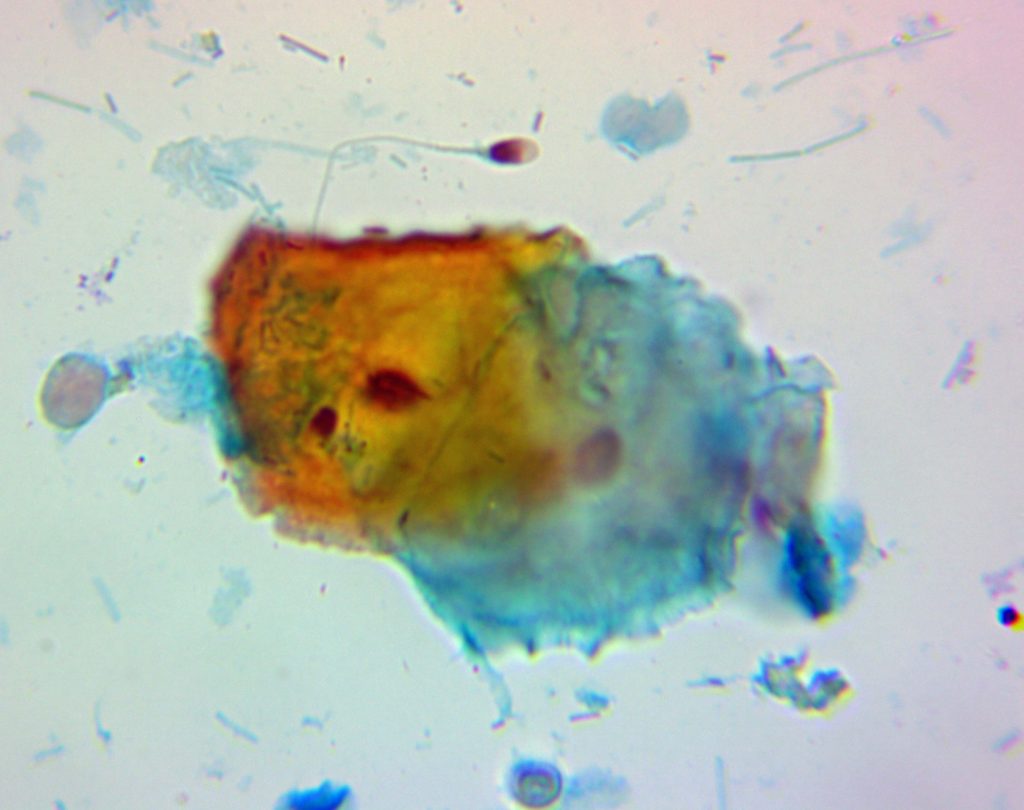 Forensic DNA Laboratories today are often overwhelmed with the type and number of forensic cases that come through their doors. As the awareness of the ability to obtain DNA profiles from touch and transfer DNA increases, investigators are increasing the number of samples they submit to the lab and even simple burglary cases with “touch” DNA evidence are routinely submitted for analysis. So, it might seem to make sense, in some respects, why many laboratories are decreasing the amount of serological testing they perform on evidence items and are opting instead to move directly to extraction and quantification instead of examining rape kit evidence, for example, for the presence of body fluids like semen and saliva

But, what information can be lost if the lab chooses not to examine the evidence for biological fluids before they extract? Unfortunately, a significant amount of information is missing when a lab chooses to perform a “male DNA screening” test and bypasses traditional serological techniques.

By failing to examine a pair of underwear or the interior of a bra cup or a sexual assault kit swab for the presence of saliva – especially when the victim alleges oral copulation or kissing/licking of the breasts, the lab misses a golden opportunity to corroborate the alleged victim’s story. Many times the argument against testing for the presence of saliva runs along the lines of “well, the Phadebas test or Radial Diffusion test, is just an presumptive test so the positive results could be from some other body fluid”. Or “I thought the sample might be limited, so I didn’t want to waste any sample and went right to DNA testing”.

While it is true that body fluids other than saliva do contain amylase, a strong positive result, combined with more specific immunoassay card tests (like the RSID-saliva test) and a DNA profile matching the suspect is useful information to the trier of fact – just as a negative saliva test would be useful information that might negate part of the alleged victim’s version of events. In regards to the wasting of sample argument, the RSID-saliva test is performed on the aqueous portion of the extracted sample. The cellular material remains in the test tube and can be forwarded on to DNA analysis with absolutely no loss of sample.

Another test that I am seeing going by the wayside in some forensic laboratories, is the test for the presence of semen. Instead of examining an item with an Alternate Light Source looking for fluorescing stains, followed by presumptive semen testing with the Acid Phosphatase test and finally a microscopic examination for the presence of sperm cells, I now see labs – apparently in an effort to save time and streamline testing – going straight to extraction and quantitation of an apparent stain or sexual assault kit swab.

While this method of “Male Screening” can indeed tell the analyst if male DNA is present, it does nothing to inform the analyst regarding the number of sperm cells present, whether saliva may also be present in the sample, or whether any tails are present on the sperm cells. Why is this important? Because the number and quality of the sperm cells can help one to determine the relative time since intercourse (TSI) interval. While the TSI might not be important in all cases, it can be critical in some.

For instance, if a female states that she had consensual intercourse with her boyfriend on Sunday night but after an argument, he raped her on Wednesday morning and she immediately sought medical attention, screening the vaginal swabs for the presence of male DNA will probably give you a positive result regardless of when the sexual intercourse occurred (Sunday night or Wednesday morning). However, if the sample were examined microscopically, then additional information could be obtained. If the microscopic examination revealed a large number of sperm cells with some or most having tails present, this would indicate a much more recent ejaculation than if there were a few sperm presents without tails. A “many sperm” sample would tend to support the alleged victim’s statement while a “few sperm” sample would tend to support the suspect’s statement (assuming internal ejaculation and no condom use each time).

Similarly, if a murder victim is located – especially one who may have been a prostitute – and her vaginal swabs are positive for a low number of sperm cells, this could be more indicative of sexual intercourse a day or more before her death and therefore the person whose sperm is present in her body is not necessarily the person who killed her.

While there are generalizations that can be made regarding the number of sperm cells, presence or absence of tails, and presence of absence of Acid Phosphatase or the protein P30, it is important to note that various medical conditions, drug and alcohol use, physiology, and other factors can impact a man’s seminal fluid. However, in general, the longer the time that has passed since the act of intercourse, the lower the number of sperm cells that are expected to be found. The following chart summarizes the average sperm, AP, and P30 survival rates from various body cavities and also indicates the longest time periods that these substances have been detected.

As can be seen by Table 2, the average number of sperm cells detected decreases significantly as TSI increases. This information can be used to help aid an investigator in attempting to determine the amount of time that may have passed between the sexual act and the time the samples were collected.

Overall the persistence of seminal constituents is affected most by the time since intercourse, drainage from the vagina which can be enhanced by physical activity (activities like walking, using the bathroom, showering, and changing clothes, for example would be expected to reduce the amount of semen present in the female), and dilution with vaginal secretions. In addition, bacterial action and natural immune response to the presence of a foreign substance also work to break down the sperm cells and inactivate the AP and P30.

At Advanced Serology Laboratory, we can perform saliva and semen testing (among other serological tests like characterization of vaginal swabs). In addition, we can and do photo-document the amount and quality of any sperm cells located in the sample, and we can determine whether P30 and AP are still present in the sample. All of which gives you additional and valuable information about your case.

Resources used to research this article include:

Davies and Wilson. The persistence of seminal constituents in the human vagina. J Forensic Sci. 1974, 3, 45-55

Dziak, R et al. Providing evidence based opinions on time since intercourse (TSI) based on body fluid testing results of internal samples. Journal of the Can. Soc. of For. Science 44(2): 59-69. May 2011